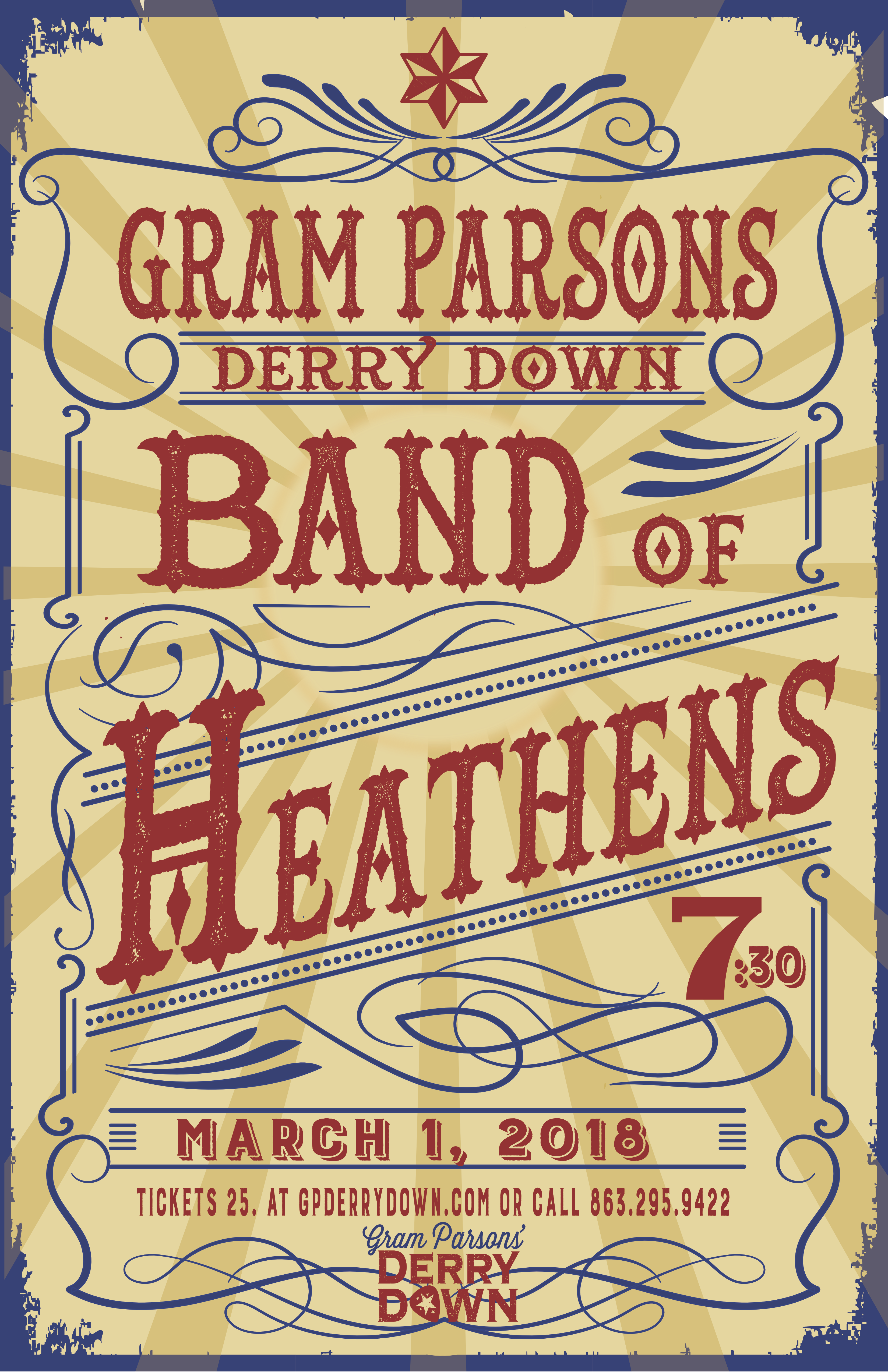 Duende, the title of The Band of Heathens’ fifth studio album (and eighth overall), marks their tenth anniversary as a group, and it certainly applies to its overall theme about the collective search for connection and communion in a technology-fueled world increasingly splintered, distracted and lonely. As band co-founder Ed Jurdi, who first learned of the term, explains, “It’s the essence of the artist,” or as partner Gordy Quist says, “It’s a word we don’t have an equivalent for in English, Artistically, that’s where we tried to set the bar, to do what this band does best.”

Indeed, Duende lives up to those high ideals, a stylistically diverse effort that takes a leap beyond their last, more acoustic, introspective effort, 2013’s Sunday Morning Record, with an eclectic batch of material that shows where The Band of Heathens has been, but more importantly, where they are going.

There are high-energy rockers like the Keith Richards-Chuck Berry guitars and barrelhouse piano in “Trouble Came Early” as well as the Grateful Dead-by-way-of J.J. Cale Oklahoma boogie in “Keys to the Kingdom,” The Band-meets-New Orleans honky-tonk blues of “Sugar Queen,” the British Invasion harmonies laced through “Deep Is Love,” the south-of-the-border flavor of “Road Dust Wheels” and the New Riders pedal steel country twang of “Green Grass of California,” an ode to the more potent strains of sensimilla on the dispensary shelf and a fervent plea to “legalize it.” Duende also touches on some of The Band of Heathens’ favorite topics, from the sacrifices of a life lived on the road (“All I’m Asking”) to the limits of materialism (“Keys to the Kingdom”), social media absorption (“Cracking the Code”), and a moving depiction of

Mexican immigration in an age of increased discrimination (“Road Dust Wheels”).“Road Dust Wheels” is particular timely, dealing specifically with the migration of workers from Mexico and Latin America. “It’s not about the politics of the situation,” explains Jurdi, “but a meditation on people trying to get together to find their own slice of the American Dream, which has been our greatest export to the outside world. Unfortunately, we’ve got leaders trying to divide us, spitting venom and vitriol, trying to get elected by pitting us against each other rather than realizing, almost without exception, we create the same felling of community and connection, regardless of religion, race or immigration status.” Similarly, according to Quist, “Keys to the Kingdom” is a portrait of someone who falls prey to the consumer culture of more, unable to enjoy the present because she’s obsessed with wanting more in the future… and it doesn’t end well. “Sugar Queen” is its sequel, the same character as a newly divorced cougar looking for love in a younger man, told from the perspective of that younger man, another song about the thirst for real connection. Thematically, Quist’s “Cracking the Code” comes closest to reiterating the album’s desire to reconsider the value of relationships and priorities in a world of virtual reality and social media. “While modern technology has certainly allowed us to stay in touch over vast distances – something a band that lives on the road certainly appreciates – it doesn’t really provide the authentic connection we crave,” says Gordy. “We’ve created a portal through which we lose ourselves and miss what’s really going on right in front of us, hiding the fact our supposed connected culture can be a really lonely place.” “Deep Is Love” is another song about loneliness on the road, according to Quist. “At the time, I felt like I had all these tools to stay in touch with my family – from Facetime to Skype – but all the while we were missing the deeper connection that comes from being physically present in one another’s lives.”

Likewise, Jurdi describes “All I’m Asking” as a song about “missing his wife… lost opportunities, second chances and getting back to the place where it’s just about two people in the same room having a special moment together without outside interference.” Armed with almost 40 songs all together, the group recorded in a variety of different locations, the majority in the Texas Treefort, a studio in their own Austin backyard, where they took advantage of the vintage broadcast tube equipment to create the album’s warm, inviting sound. All the tracks were initially laid down live in the studio by the full band, making an effort to keep the music infused with its “analog” elements as well as the communal feel. “I feel the album brings together all our influences, everything we’ve done over the years as a band,” explains Jurdi. “We’ve touched on every part of our career… our roots, some singer/songwriter contemplative stuff, some high-energy rock ‘n’ roll. It’s all us, the record we were supposed to make. Ten years later, that’s what keeps us coming back.” “We really opened ourselves up to the collaborative process this time,” adds Gordy. “The trust we have between us enabled us to chase down our individual ideas wherever they take us. That’s the beauty of being in a band.” Engineer/co-producer Jim Vollentine (Spoon, White Rabbits, …And You’ll Know Us by the Trail of Dead) helped the album’s diversity sound coherent, adding unique touches such as mellotron and drum machines to the loping rockabilly of tracks like “All I’m Asking.” “It’s amazing how getting the right sounds just brought the songs to life,” adds Ed. “Hearing it come back at us through the speakers was really inspiring.” Gordy explains: “We based the album’s eclecticism on our live shows, where texturally, we go through peaks and valleys. We have this library of music in our heads and at our fingers, and when we go into the studio, the challenge is how to go from that into making something new.” The term “Americana” was practically invented to describe The Band of Heathens’ approach, which has mutated almost as much as the genre to which they’re identified. And while the Rolling Stones and The Beatles remain touchstones on songs like “Sugar Queen” and “Deep Is Love,” respectively, influences as diverse as Sly and the Family Stone (in the psychedelic fuzztones of “Daddy Long Legs”) and Latin music (“Road Dust Wheels”) also rear their heads. Literary inspirations also come into play, ranging from a character in Sylvia Plath’s The Bell Jardepicted in as a strutting cougar in “Sugar Queen” to Tom Standage’s A History of the World in Six Glasses, which recounts how beer, wine, spirits, coffee, tea and Coca-Cola have shaped culture and civilization to modern times (“Trouble Came Early”). “Green Grass of California” – with its praise of today’s strong strains of bud and a fervent plea for legalization — was recorded in Nashville and supposed to include harmonies by Tim Easton, who ate a marijuana cookie and inadvertently lived out the song’s lyrics (“When your eyes are red/Spinning in your head/Remember it’s only in your mind)”), unable to continue.

Duende is The Band of Heathens playing to their strengths, unapologetically constructed as an old-school 10-track, two-sided vinyl album (which it will be released as, with a second disc encompassing four songs from their Green Grass EP released earlier this year). For co-founders Jurdi and Quist, the album represents a new beginning. “Our goal is always to make the best record we could make,” says Jurdi. “We’re taking our influences and pushing them into different sonic territory. I feel the band is in a great place to take that next step. More than ever, people need to feel connected. Just like Paul Revere or the town crier, we’re messengers trying to spread the good word and tap into the communal spiritthat is created in the wake of music and song. To make your way through the world via inspiration and ultimately, creation, is truly a gift; it’s something we never take for granted. The singular purpose is always to bring our best stuff to the table, whether making a record or playing a show. The hope is that it both resonates with our long-time fans and strikes a chordwith people who are just being introduced to the music.”

“We just try to keep writing songs that mean something to ourselves and others,” concludes Gordy. “The challenge for us as artists, in these disturbing times, is how can we change things? Music is fun and an excuse to get out with other human in a room together, but you also hope the songs will mean something when someone is all alone in their room listening to the record. This band is better than it’s ever been.”